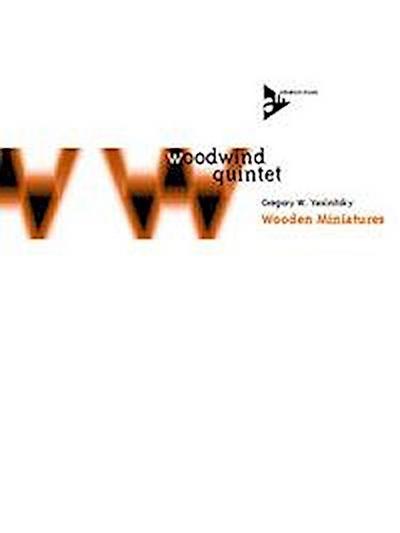 Wooden Miniatures was commissioned by Washington State University in commemoration of the WSU Library Addition. Most of the compositional work was done in April and May of 1994. The work is dedicated to the Solstice Wind Quintet and they presented the premiere performance at the dedication of the Library Addition in August of 1994.Since the work was composed for a ceremonial occasion, the goal was to create positive and uplifting music. Since the time frame available for the performance was somewhat limited, it was necessary to condense some of the musical ideas. The goal was to create a piece which had the feeling of a complete work, yet was short and concise.Wooden Miniatures is in three movements: I. Made of Mahogany features brilliant, sprightly colors; II. Teak Elephants is more melancholy and reflective; and III. Fashioned from Boxwood begins with a march-like fugato followed by a return of material from the first movement. The title is a play on words. Three short pieces featuring woodwinds can be categorized as "Wooden Miniatures", but then I began to think about libraries, especially personal libraries and the carved wooden figures and bookends sometimes found on the shelves, and I was reminded of the wooden elephants which my grandfather kept in his library. (GWY, Pullman, WA)Schwierigkeitsgrad: 4